A Student Reader Offers A Perspective on Professors, Respect & Responsibility

I don't have straight A's nor am I failing. I do better in some classes than I do in others and I try my best to not complain. In high school, I made some bad choices and eventually dropped out my sophomore year. Ironically, I was an exceptional student. I was just so bored. The plan was to begin home schooling. I could get a head start on college and be done with it all so much sooner than my peers. However, things didn't go that way.
Instead of continuing with my education, I allowed myself to slack off for a while. I knew I was above average, but unfortunately for me, that did not apply when it came to responsibility. I procrastinated and procrastinated for two years. By the grace of God or just by luck, depending on what you believe, I somehow stumbled upon a program for students who needed an alternative method of high school.
I finished two and a half years of high school in three months and recieved a diploma. I understand how many different kinds of wrong that seems, but I believe I learned more there than I would've had I stayed at my original high school. A week after finishing, I entered college, and in turn, had to learn that I am the only one I can blame for my lack of responsibility.
I've been here a year now. Last semester left me with a GPA that makes me sick inside and I learned from it.
My experiences with my professors have been mediocre. I find that most professors seem bitter that they are teaching where they are. I've had a few even speak about things they would rather be doing with their lives. I've had some encourage us to do as little work as possible to get by (and I mean really encouraged). They make me sad. They make me wish I could do something wonderful for them to reignite whatever dream they had of t 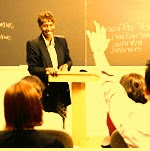 eaching when they first began. All of my efforts have been fruitless and I eventually give up.
Then there are the ones that are great, the ones that make me love learning as much as I did in Kindergarten when it was all coloring inside the lines and memorizing how to spell your name. I adore these professors, but most of all I respect them.
But the thing is, good, bad, or just plain tired, I respect all of my professors. I am there to learn something from them (them learning something from me is something amazing and entirely unexpected). I believe they know what they are doing and if at the beginning of the semester they say, "no dropped grades, no retests, no slack, no nothing," its the law of the land...or at least their classroom.
The thing that has always been told to me is that in college, they aren't there to hold you hand. Professors shouldn't have to pick up our slack. We're supposed to be big enough to stand alone now and if we aren't, we should be allowed to fall.